For several months, students have been asking me about how to build agility jumps to use for practicing at home.  We decided it would be fun to have a workshop on how to build jumps. 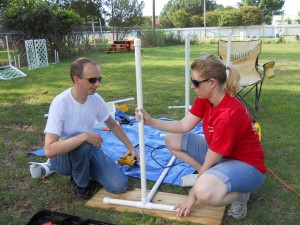 The workshop was only open to students of Cowtown Dog Sports.  The students had the option of building one or two jumps that they got to take home with them afterwards.  They glued the standards together and decorated the jump bars.  If they were making a jump with bolts as jump cups, then the students drilled the holes and put the bolts in themselves.  If they were making jumps with the jump cup strips, then they learned how to place the strip and mount it to the jump standard.  All of the materials they needed were provided along with a handout with instructions on how to make jumps so they can make more for themselves if they want.  We also talked about the jump heights used in different venues and all the different materials that are available for building jumps.

We met early in the morning while it was cool outside and worked in the shade.  It was fun to see students from different classes get to know each other and help each other out.  Cowtown Dog Sports students are an awesome group and we’re very lucky to have them and their dogs train here. 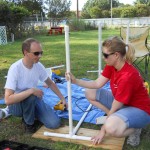 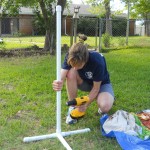 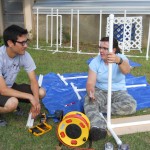 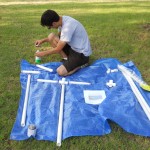