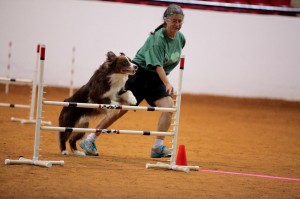 Robin Barber, KPA-CTP, CPCFT has been training and competing in agility for over 13 years.  She has attended and/or participated in seminars with agility greats such as Susan Garrett, Greg Derrett, Silvia Trkman, Stuart Mah, Melanie Miller,  Lisa Schmit, Chris Zink, Eva Bertillson and Emilie Vegh, and Linda Mecklenberg among others.  She has also extended her training knowledge through conferences and workshops, including Clicker Expo, Chicken Camp, and ORCA, and many online classes. Robin graduated from the Karen Pryor Academy in 2010 and from the Canine Fitness Trainer Program at the Fenzi Academy in 2016.  Robin’s own dogs include mixed breeds Misha, Shawnee, and Zeener (deceased), and Australian Shepherds Bullet and Surge.

Agility
Misha, has earned multiple Agility Championship titles in NADAC, ASCA, and VALOR and is in multiples categories in the NADAC Hall of Fame.  She has been in the top ten in almost all events in NADAC and has been ranked in the top five in AMBOR (American Mixed Breed Obedience Registration) for multiple years.  Bullet, Zeener, and Surge also have titles in multiple agility venues.

Canine Fitness
Robin recently became a Certified Professional Canine Fitness Trainer through the Fenzi Dog Sports Academy under Debbie Gross.  The program required 8 months of online study, 4 multi-week case studies, and a 6 hour exam.  Hands on work was accomplished using both video and a live workshop at Wizard of Paws.