Skip to content
Home » Uncategorized » Why Are You Doing Agility?

At a recent trial, I saw many people I hadn’t seen in awhile.  Bully has had some shoulder issues and between that and me starting a business, we haven’t been trialing very much for the past couple of years.  It was great to see people and their dogs again and catch up.  I noticed a trend though that seems to be getting worse.

Some people would ask me how my day was going and I would tell them about a milestone we hit in our training or something that we learned from a run.  I also told a few about finishing up some titles.

Then I would ask the person who asked me the same thing and they would answer in terms of the number of Q’s they were getting that day.  I heard nothing about having fun or some training accomplishment they made as a team.  Their demeanor was a direct reflection of the number of Q’s that day.  People who felt they had a low Q rate were unhappy and frustrated while those with lots of Q’s were happy and having fun.  One person – who has a really nice dog that runs well with him – was talking about taking another break from agility since he was frustrated with their Q rate that weekend.  Clearly he wasn’t having any fun anymore and I suspect his dog wasn’t either. 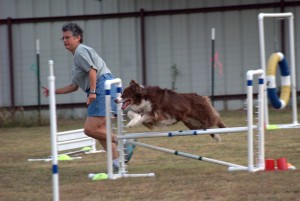 What I’m seeing disturbs me.  Some people seem to have lost touch with what agility is really all about.  It’s not about putting championship titles on your dog before he’s 2 years old or gathering more points or Q’s than anyone else.  It’s about growing your relationship with your dog.  It’s about the struggles and the journey you take together to overcome them.  It’s about having fun with your dog.  To paraphrase something I read recently:

When your sense of pleasure is derived from comparing yourself to others (or to your Q rate), you are no longer the master of your own happiness.

If having fun is determined by how many Q’s you get at a trial, then you’re losing touch with what’s really important.  You’re losing out on having fun with your dog.  You’re wasting the short time that you have with your dog (and yes – it really isn’t long enough as many people with older dogs can tell you) being frustrated and unhappy instead of enjoying all that you have done together.

I admit that I like getting Q’s and titles as much as anyone.  I feel proud of my dog and what we have accomplished, but I’m not going to let it rule me.

Ask yourself – is a Q really so important that it dictates how much fun you’re having with your dog?  Why are Q’s so important to you?  I promise you that your dog doesn’t care.

Why are you bothering to do agility if it’s no fun?