Skip to content
Home » Uncategorized » Awesome! You Get To Learn Something New!

I admit don’t know much about how the public school system works currently, but I can tell you that when I was in school, it was BAD to be wrong about something.  You were a failure.  You were stupid.  When it happened in front of the rest of the class, you were ashamed.

The end result of that kind of environment is that were raised with the belief that is it shameful to be wrong or make a mistake.  That attitude is prevalent in our society as a whole. It makes us want to stay within our comfort zone and not try anything new – and thus not learn anything new.

The truth is that we can’t learn without making mistakes or being wrong.  As long as you are honestly trying, all a mistake or error means is that you have the opportunity to learn something new!  Nothing more.  Nothing less. You have nothing to prove to anyone.  All you have to do is learn the lesson, let any shame for it go, and move on!

The same is true for our dogs!  They aren’t robots.  They need the opportunity during training to make those mistakes and learn from them.

Before passing judgement on your dog, make sure that he truly understands what it is that you are trying to teach him. This means training the same behavior in different places, with different distractions, and independent of where you are located relative to him. 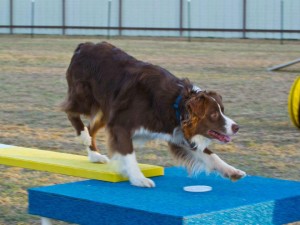 Our dogs are one of our best instructors if we are willing to listen to what they are telling us!

For example, if you feel like your dog is always deliberately “blowing you off to go into the tunnel”, make sure it’s not something that you’re doing – such as a late or incorrect handling cue – that sent him to that off-course tunnel.  Is it possible that you’re getting frustrated and stressing her out and that’s why she’s running off and sniffing or getting the zoomies?  Maybe you’re not giving your dog enough treats or expecting too much of him too soon? Maybe your handling in the ring is different than when you train and that’s confusing your dog?

If you find a mistake that YOU made (and most of the time you will), then that’s great! Your dog just taught you something new!  No shame in that! You’re not stupid or a failure. You did the best you could with what you knew then and now you know better. Do your best to fix it, let it go, and move on!

You just got to learn something new!  Awesome!

For more articles on the Dog Agility Blog Action Day, go to http://dogagilityblogevents.wordpress.com/continuing-education/