Recently a local ASCA club held a Senior Specialty class at a trial – a chance for us to honor our old agility dogs.  I took my 14 year old beagle mix Zeener.  The dogwalk and jump bars were lowered.  The chute and teeter were available by choice and we each got the chance to take our old teammates around the ring one more time as a biography about each one of them was read.  Each was honored with a customized ribbon and some other gifts as we left the ring.  It was a really nice event. 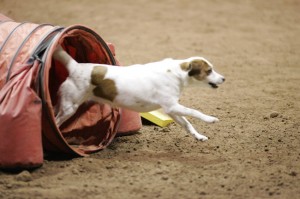 It was great to see many of these dogs again.  I remember them as youngsters with the excitement and fire of the trial in their eyes.  Now they were there again – and you knew they remembered their younger days and earlier times – as they each took their turn around the ring.  For some – it was probably their last time around a course.

Zeener was my first agility partner.  I found her at a bus station in Houston in January, 2000 where she was running around trying to play with people waiting for their buses.  As people kicked and threw things at her to make her go away, she seemed to take it all in stride and simply go to the next person – never missing a beat.  I was impressed with how she handled them and I realized she was special.  I caught the skinny, flea infested dog and talked my husband into picking us up.  While we waited for our ride to arrive, there was a moment when Zeener and I looked directly into each other eyes.  It was as if both of us knew in that instant that she had come home.

She was a “wild child” after I got her home and I ended up taking her to a local obedience class which served as my introduction to the world of dog training.  Life went on, but several years later, I remembered that class, found a local agility  instructor, and we entered the world of dog agility and training.  Zeener earned several agility titles, a Novice Rally title, CGC, Therapy Dog Certification, and she passed the official Dog Scout test although we never had enough time to pursue badges.  We had to stop agility for awhile since she began having back problems, but she came back again to place in Tunnelers and Hoopers at NADAC Champs in 2009 and to run Jumpers with the bars set at 4″.

Most of all, Zeener started me on a journey that completely changed my life.

As we took our trip down memory lane/around the ring at the Senior Specialty, I started to realize how much older Zeener has become in recent days.   She passed on the chute, took the obstacles much more slowly and carefully than she used to and I found myself helping her over the teeter.  She doesn’t see or hear as well as she used to and I’m starting to realize that her final Novice Jumpers run is coming soon.  It makes me sad, but I’m also very proud of my “little old lady dog”.  Not just for her accomplishments, but for the life that we’ve had together since looking into each other’s eyes 13.5 years ago.  As far as I’m concerned, I was lucky enough to have an angel sent to me that day.  I plan on spending more time with her just watching the sunset, hanging out, and enjoying each other’s company.

I want to thank ASCOT for putting on the Senior Specialty.  It was a very special run for many of us and it was great to see some of the dogs that we started with on this journey in the ring again.  Thanks to Kara Sellers for taking the video.