Skip to content
Home » Uncategorized » On the Word ‘No’….

When training my dogs, I very, very rarely tell them ‘No’.  This especially goes for training dog sports.  I focus on showing and telling them what they are doing right.  If they get it wrong, then I simply try to communicate what I want them to do rather than focusing on what I don’t want them to do. 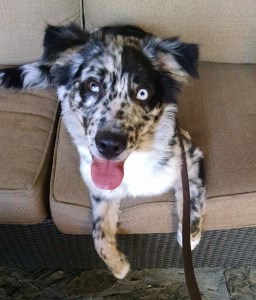 Think back to school and learning a particular subject – math for example.  Imagine you are having trouble with a math problem and getting some help from someone to understand how to do it.  So you (the dog) try to do the problem.  The person helping you (the trainer) tells you ‘No – try again’.  So you try again.  And the person helping you again says ‘No, that’s wrong – try again.’  After repeatedly hearing ‘No’ over and over again, you will start to give up and just sit there.  You don’t know what to do and the person who is supposed to be helping isn’t giving any guidance.  It’s very discouraging and may even hurt your self-esteem when it comes to doing math.  You probably won’t want to do math anymore.

Imagine a different scenario where you (the dog) are having trouble with the math problem, and the helper (the trainer) says ‘OK.  At this step, let’s try to do this.’  Then you try it and a light bulb goes on!  You start to understand where you were going wrong and how to do it correctly.  The helper is guiding you in the right direction and you are learning from it.  And even better, you have the confidence to try a different, similar math problem to see if you can do it again.   You may even be excited about your new found knowledge and start to really love what you are doing since you are having success with it.

Some helpers (trainers) will use a combination of ‘Yes’ and ‘No’.  While this is better than only saying ‘No’, it still hurts your confidence since you aren’t sure if you are getting it right on this particular try.  No one (or dog) likes to be told they are wrong.   If you’re never sure what’s going to happen as a result of your trying, you won’t be confident in your answer since you don’t know what the result with be.  It makes you unsure of yourself and if you can do it correctly.  It hurts your confidence and self-esteem.

‘No’ comes in many forms when it comes to dog training.  Besides the obvious, it also comes in the form of leash pops and scolding.  You as a trainer getting frustrated can be a ‘No’ to your dog since they pick up on your frustration.  Some dogs will react to these things by avoiding the scenario (running off) or by shutting down.  Some dogs may not outwardly show it, but it may still be having an effect on how much they want to play the game with you.  None of us really know what they are thinking.  We can only observe the results.

Most dogs are very much about pleasing their trainers.  (If your dog isn’t then you have bigger problems in your relationship.)  By guiding them towards what TO do rather than what NOT TO do, they better understand what makes us happy and thus want to play the game more.  The result is a happier dog – and isn’t that really what training is about?